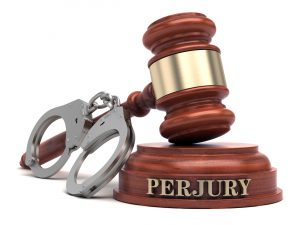 In this case revision petition was filed by Wife, against the order  wherein the Court of Additional Principal Judge (Family Court), Ambala has ordered that it would be expedient in the interest of justice that an inquiry should be made against the her ( Respondent no.1 before the Family Court) into an offence under Section 191 IPC punishable under Section 193 and a separate complaint in this regard has been ordered to be sent by the court to the court of learned CJM, Ambala.

In 125 Cr.PC an application for interim maintenance and in other cases . Wife stated that she has no source of income or property and was unable to support herself. During her deposition she maintained the same stand of having no income but she was confronted with the record relating to her job and she admitted that she was working as an Assistant Professor in Chitkara University, Rajpura on a monthly salary of Rs.28,000/- per month. The petitioner joined on 3.7.2017 whereas she had moved an application under Section 125 Cr.PC on 26.07.2017 where she had stated that she does not have any source of income or property to support herself or her daughter. Thus, it was contended by the respondent-husband that she had deliberately and intentionally given wrong information to the court in order to grab the maintenance and harass him. He further contended that she was well educated being/employed as an Assistant Professor with a salary of Rs.28,000/- per month which was sufficient to maintain herself and their child. He stated that it was the foremost duty of the parties to tell the truth so that the Court can reach a conclusion as to whether the amount claimed as maintenance by the wife was to be paid or not. The fact that she had not disclosed information that she was earning Rs.28,000/- per month and also had NSC of Rs.30,000/- and Rs.1 Lakh in her PF Account, inquiry ought to be made and proceedings initiated against her under Section 340 Cr.PC. He had further stated that his wife had received an interim maintenance from him to the tune of Rs.10,000/- on 06.05.2019 knowing fully well she was not entitled to maintenance as she had obtained that order by making false statement. He thus claimed that an FIR should be registered under Section 191 to 195 IPC against her.

Para 8. At the very outset it may be stated that the proceedings under section 340 Cr.PC are undoubtedly initiated at the instance of one party but it is a matter of administration of justice and, therefore, ultimately it is between the parties and the court. Though, quite rightly, the effect of such proceedings may actually befall on either of the parties.

Para 12. As has already been mentioned above, the various judgments referred to by the counsel are on the facts of those cases and as such do amount to a binding precedent. The practice of making false assertions in court ought to be discouraged because the dignity and sanctity of the court is undermined by such conduct of a party to a lis. Thus keeping in view the aforementioned facts and circumstances, I find no merit in the petition and the same is hereby dismissed.

Union Of India And Ors vs Haresh Virumal Milani on 17 April, 2017